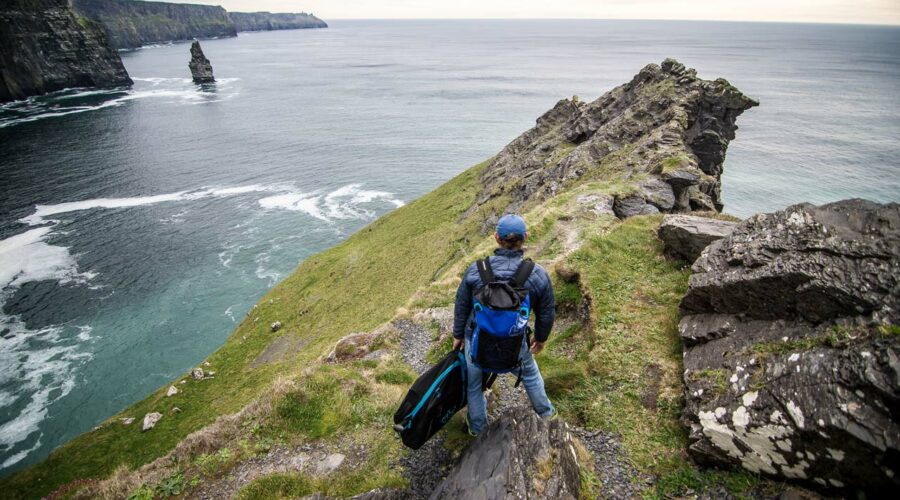 Inflatable paddleboards have opened up a whole new way to travel and explore places close to home. Pack your bags, along with your iSUP and 3-piece paddle on the train, plane or car, no hassle. Bart de Zwart and Franz Orsi explore 5 European cities in just 4 days using public transport.

“Normally, for a short adventure or long expedition, I start with Google. I can spend hours and days looking at the satellite images of foreign places and countries, planning my next trip. Then some background information about the place I go, weather, culture, things to see, and off you go. When we planned this short trip through Europe there was not too much planning though. We call them mini adventures. I was excited to see some new places from the water. So Franz and I looked for a combination of some easily accessible cities and some nature. What I like about the mini adventures is the simplicity. Just grab the SUP roller bag, some clothes,a paddle, and hit the road and see what you find. We normally have a general idea where we’re going, for the rest we see what comes on our way. Normally I love to travel by train with my ISUP. You can get comfortably anywhere in a short time and luggage is never an issue. This time we decided to go with a small car.

I had been in Ireland many years ago and had fond memories. So I was curious if this country still is this green, mystical place, full of culture and friendly people. I have to say, Ireland fully lived up to my expectations.

The cool thing about these mini-adventures is that you can time them with the weather. Ireland looked sunny for a couple of days. “Let’s go there,” we thought. We picked up a rental car at the airport and drove straight to the west coast.

First stop; Cliffs of Moher. Towering more than 200 meters straight out of the sea, it is a raw and magnificent sight. We took a not-touristy back road and parked the car close to the cliff. Getting to the water from this point was a challenge. A tiny path on this very steep cliff led to the bottom of the cliffs where we could enter the water. The cold water and crashing waves gave us another challenge.

Once out on the water, you realize what a beautiful place it really is. The raw energy of the waves crashing on the cliffs, the smell of seaweed and fish and thousands of seagulls flying around us or nested in cliffs. We came in again at 9 when the sun was starting to set.

After our final climb back up, we looked for a small bed & breakfast in Doolin. The host told us we could probably still get a bite to eat in the pub next door. That night made our first experience in Ireland complete. A small band was playing loud Irish folk music and the owner found us one last plate of stew from the kitchen. It was perfect.

The next day we drove through small fishing villages, passed lakes with castle ruins on their shores and we went for a paddle on the river in Galway. The highlight of the day was Mullaghmore Head where we paddled just off the road next to the green pastures with big Irish sheep. We windsurfed with a nice offshore breeze and the silhouette of a beautiful castle in the background. Another perfect day.

On our third day, we met up early morning with local legend and teammate Finn Mullen who lives in Bundoran. In the winter he rides the giant waves there. Although not giant this day, we jumped in the water with him and rode some of the peeling waves, breaking on the sandy beach.

After breakfast, we headed for the airport. But not before we made time for one more stop: paddling Lough (lake) Erne. (lake) Erne.

I am Dutch and lived there mostly for the first 18 years of my life. I still go back there every year to do races. But to be honest I haven’t seen much of Holland.

With Franz, it was a perfect opportunity for a mini-adventure in the Netherlands. It is a very urban country with a lot of lakes, canals, rivers and the North Sea, so plenty to paddle. Here are many great paddles in a city. Our trip took us first to Delft.

Although very much a student town now, this Middle Ages city still has a very old centre, full of Dutch ‘grachten’ (canals). The best way to see this city is by Stand-Up Paddleboard. A quick pump got our boards inflated and up to pressure and off we went.

All the backs of the houses face the canals and although it was market and the streets were crowded, on the water we had all the space we wanted with the best views.

After this old city, we went to Rotterdam. My sister is one of the mayor’s assistants. She told me how modern this city has become. Rotterdam is the second biggest city in Holland and one of the busiest ports in the world. The inner-city is modern with some great buildings and bridges.

The river Maas runs through the middle of town. The river is crazy busy with riverboats, tug boats and cruise ships going up and down through the city. But it’s also an exciting place to paddle if you watch out for the traffic. We saved the best for the evening. A paddle through the Dutch tulip fields.

My grandma used to rave about the tulip fields at the Keukenhof so I thought we should check it out. We were not the only ones going there. Even on the radio, they told people not to go there because it was overfull. For us, it was a different story, once we reached a good entry point to get to the canals which run through the tulip fields. We had a first-class view, up close, paddling through the fields with thousands and thousands of tulips in many bright colors. It’s funny that after all these years I had never seen this up close. But it was a truly great experience.

Most great cities in Europe have great rivers running through them. We wanted to explore a few more of those cities. Our next mini adventure lead us to Ghent, Belgium. We parked our car in the middle of the center, walked to the canals and started paddling in the middle of this Middles Ages town. Living in the USA now makes you realize how rich the culture and history is in Europe. In America a 100- year-old building is old, in Europe old starts at 300 or 400 years. In Ghent many buildings are from the 16thor 17thcentury. Paddling here lets you go back to another time. After great evening paddle we went for a some extra culture, to a Belgian fries bar. We Dutch think that the Belgium has the best fries and chocolate. I am not sure why they call fries ‘french fries’ in America. We had some great fries with a nice goop of mayo on the side.Our next town was Strasbourg in France. This medieval city is now the home of the European parliament, a hyper modern building, conveniently right on the water. For us an excellent place to start off city paddle. In 25 minutes we paddled from this modern architectural highlight, made of steel and glass in a futuristic shape, to a city center with medieval city walls and castles. Some locks to control the flow of the different rivers and canals made paddling in this city very interesting. Carrying the board from one canal to the next, running between the people on the busy streets, before jumping in the water again made for a colorful journey. Being right on the border with Germany, the architecture, the food and the culture in Strasbourg are a mixture of French and German. A beautiful city but we both felt we wanted to see a few mountains, so for our last mini adventure we drove to nearby Switzerland.

Although I love the water, grew up on a houseboat on the water and sailed around the world on a boat, I still love the mountains and feel right at home. Swiss people love the outdoors and have a great balance between work and free time. There are so many opportunities for play. Apart from the mountains and the snow, they have many rivers and lakes. After a great night in a tiny little village hotel and good old Swiss hospitality, we headed for the Brienzer Lake and Thun Lake (Thunersee). We quickly pumped our boards and went for a short windsurf session on the SUP with the compact rig and a paddle session at Interlaken. Both lakes have the snowy mountain backdrop which make this such a beautiful place to paddle. After some Swiss cheese, fruit and Swiss chocolate we drove to our last paddle session in Bern. The rivers in Switzerland are fresh (read cold) from all the melting snow but they run with a nice current, which makes them ideal to explore. We put our boards in the beginning of the Old Town in Bern. A town with a lot of history, viewing it from the river is great because the whole site just passes by. We pass old stone bridges and every bend reveals another beautiful part of the town. The current is fast enough that you have to watch out for small rapids and back eddies. SUP is such a great way to see a place. Six days and five countries and five mini adventures. After I realize again why I love the inflatable SUPs. It makes Stand-Up Paddling so easy and accessible and there is so much to explore in the city, the country or in nature. Go paddle and explore!