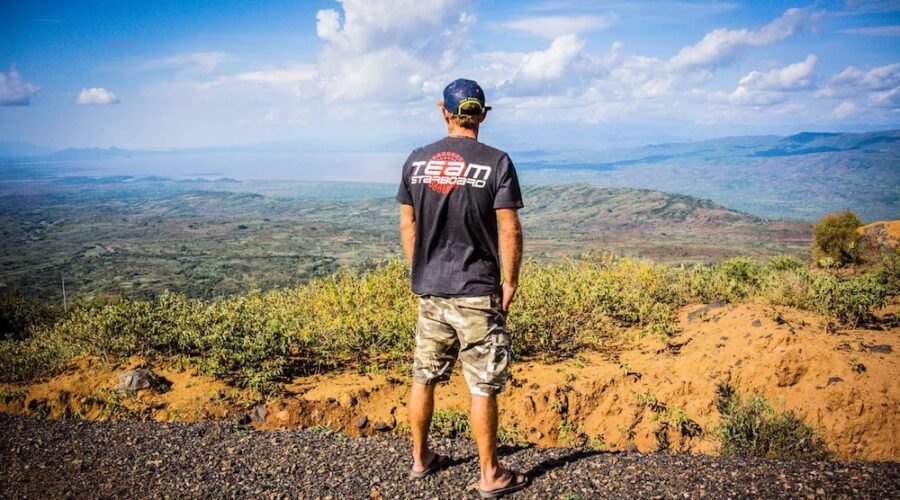 Ethiopia: The Ultimate Crossing by Paddleboard

ADDIS ABABA, Ethiopia – Air Ethiopia brings us to Addis Ababa, the capital of Ethiopia. Although the country is known for the scorching temperatures that exist here, I am surprised by the cool temperatures, the high altitude (2500 m./ 7500ft) in this city explains it.

Our destination on this leg of the trip is Omo valley. Because of the long distance to this very remote valley and relatively short time on hand, we decided to use a car with a local driver. The following day we found out just how quickly we can run out of time.

Once you leave the big and relatively wealthy city, we could see the vast and dry landscapes of Ethiopia. Along the road, houses are no longer made of bricks and mortar but wood and mud instead. Not just a few, but, basically all of them. We paddled and explored along the coastline of the many lakes we encountered, some big, wide and deep, (up to 260 meters), some salty and slightly pink and covered in flamingos and some others the home of hippos and fisherman.

On Lake Awasa we paddled into the village during the fish market. Coming into the village, locals told us to stay away from the banks because of the hippos so we tried to make sounds to warn them but didn’t see any popping up. At the beach, many of the villagers surrounded us and stared at our boards. We let two of them try them, which proved to be the best entertainment, especially when one almost fell in. After some fried fish for breakfast, we continued to Omo Valley, another long drive.

After an overnight stay with very good sleep in Turmi Village in a very simple accommodation, we continued on to a village where the Dassanech tribe live. We got the boards ready and entered the river which has a lot of current towards Kenya, only 60 km down river. After only a few kilometers down river we already got to a small village with three kids watching us from the high banks. When we paddled towards them, two of the three run away scared.
We made clear that we were friendly and gestured him to come and try our boards. Slowly and with some hesitation, he came down to the river bank and looked at the boards and the paddles. We showed the boy how it worked and he went and tried it. Before you know it we had the whole village around us taking turns paddling. I took the smaller kids with me and the bigger ones tried by themselves. The ones too scared to try, had a good laugh while they watched the others. It turned out to be the highlight of our and their day. Later at night, we visited another tribe a little more North where we put up our tent. The tribe lives in the most basic conditions possible: their only possessions are their huts and cattle. Men and women only wear a goat skin around their waist.

A few in their tribe own a rifle (AK47) to protect their cattle from being stolen by other tribes. We offered them a goat which they then killed and roasted above a fire. We were offered to drink the blood, known to them to be very healthy, but we kindly declined and let them ‘enjoy’. Only two hours later everything had been eaten by the entire tribe.

After we sat down with them, the next morning, in one of the huts and drank coffee, we broke up camp and drove back in the direction of Addis Ababa. Along the road we saw how hard women work in this country. They are responsible for finding wood and water, two very tough jobs in an environment like this. Men take care of the cattle, comparatively, a very easy job.

The next stop on our trip we fly to Istanbul, Turkey and leave Ethiopia with mixed feelings about a very poor but very beautiful country.