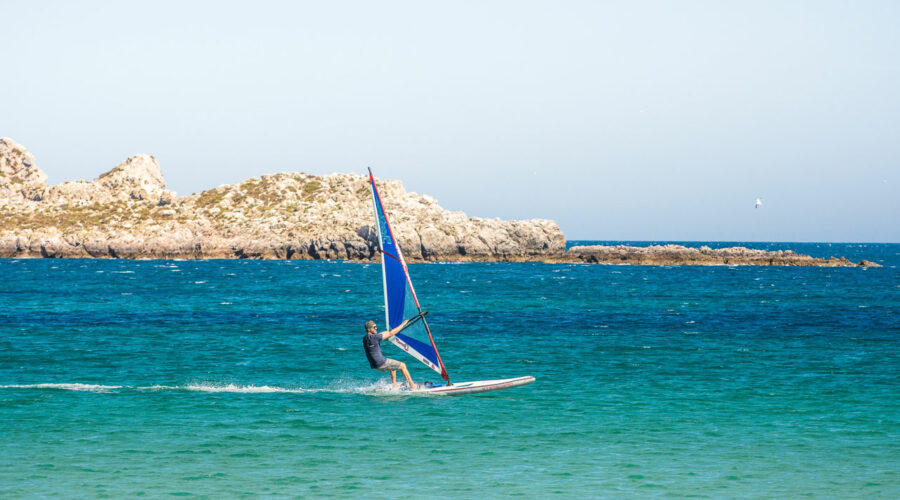 A weekend escape to windsurfing simplicity. Franz Orsi and Vania Marques explore the dramatic landscapes of Sagres, located in the southern Algarve of Portugal. It is like no other destination in southern Portugal — is a region for the adventurous, the intrepid and those that seek to pit themselves against the environment.

Looking for an easy, uncomplicated windsurf trip somewhere close to home? A weekend of genuine discovery and pure fun on the water? Then look no further: grab your favourite windsup package and head down to the nearest beach. You’ll find out that the beauty of windsurfing lies not only in high-performance gear but also in the simplicity of an inflatable board and a dacron one-batten sail.

For me, escaping for a weekend to a close-to-home hidden paradise meant driving down south to the most south-westerly of Portugal – and mainland Europe – Sagres, a place where the land ends and the ocean starts. This rugged and forbidding coast has long been considered sacred ground. The Romans called it Promontorium Sacrum (‘Holy Promontory’), the Latin origin of the name ‘Sagres’ (from Sacrum). For them, this was the ‘Edge of the World’, a supernatural vortex where the setting sun was dramatically submerged by the immense, unknown ocean.

Sagres, home to wide open beaches, nooks and crannies, beaten paths and not-so-beaten paths, where the winds are consistent all year around and cater for all abilities: this is where I was heading. From my place in Lisbon, it was only a 3 hours drive. So, equipped with my beloved Starboard Touring 12’6” inflatable board combined with the super simplistic Starboard compact sail, I hit the road. Direction south.

Located on the southwest tip of Europe, it’s one of the few spots on the Portuguese coast where you can still find wild places and remote beaches. Sagres is like no other destination in southern Portugal. It is a region for the adventurous, the intrepid and those who seek to immerse themselves in the wild environment. Expect to find empty beaches, amazing landscapes and friendly people. Overlooking some of the Algarve’s most dramatic scenery, the small, elongated village of Sagres has an end-of-the-world feel, with its sea-carved cliffs high above the frothing ocean strung with wind-whipped fortresses that connect it to Portugal’s rich nautical past. From here, the Portuguese started their journey of discovery of the seven oceans. For sure, this place carries even now an undeniable allure and magic feeling that connects the visitor with this glorious past.

The best season to go to Sagres is really all year long, although it partly depends on what you’re after, and what sports are you most interested in. The good thing about having with you a windsup board is that you’ll be able to keep your options open and either go sailing or stand up paddling.
Rainy days are a rarity around Sagres so you can count on warm weather and lots of sun, even when the rest of European shores are freezing. In the summer, from May to August, you will find incredibly reliable north winds but still plenty of surfable beachbreaks if you prefer paddlesurfing over windsurfing. But take notice, in July and August, you need to make your reservations ahead or you’ll be sleeping on the beach.
In the wintertime, on the contrary, you will find yourself mostly alone in the water but with incredible waves and pumping swells.

The good thing about Sagres is that it’s right at the corner between Alentejo’s west facing coast and Algarve’s south-facing coast. That means that – with the summer Nortada winds – you can choose to go for a flatwater session on the south coast or for a wave session on the west coast. In Sagres you can surf almost any swell and go windsurfing – or windsuping – almost on any give day. If there’s a small swell from north or west, you can venture to the west coast for some windsuping in small waves. When big swells come from those same directions, you’ll be better go find some sheltered spot on the south-facing coast. If you are up for some serious paddlesurfing, you will find plenty of spots there. A south swell can deliver some nice waves on the south coast, but you have to be lucky to score one.

After so many years of performance-oriented windsurfing I sometimes felt the need of a more genuine approach to windsurfing. Especially after I got in touch with stand up paddling, and made it an integral part of my life, I felt that simplicity and exploration where two elements that were just missing from my windsurfing experience. Luckily when windsups came about the element of pure enjoinment and exploration came back into play. With a windsup, in fact, you can decide to go exploring your coastline – either by paddling or by sailing – or you can go blasting on the water and have some serious fun appreciating the simplicity of it.

For me, it is great to feel the wind in my hands and get back at those days where windsurfing for me was just a summer game – a long board and dacron sail on which spending all my afternoon cruising around the bay in front of my family’s house in Italy.

Windsurfing – and paddleboarding – took me so far in life since those early days on the water, but getting back to that feeling of effortless gliding and return to the roots it’s one of the coolest things I experienced during the last years. And I look forward to do more and more of it over this long, sunny, Portuguese summer.