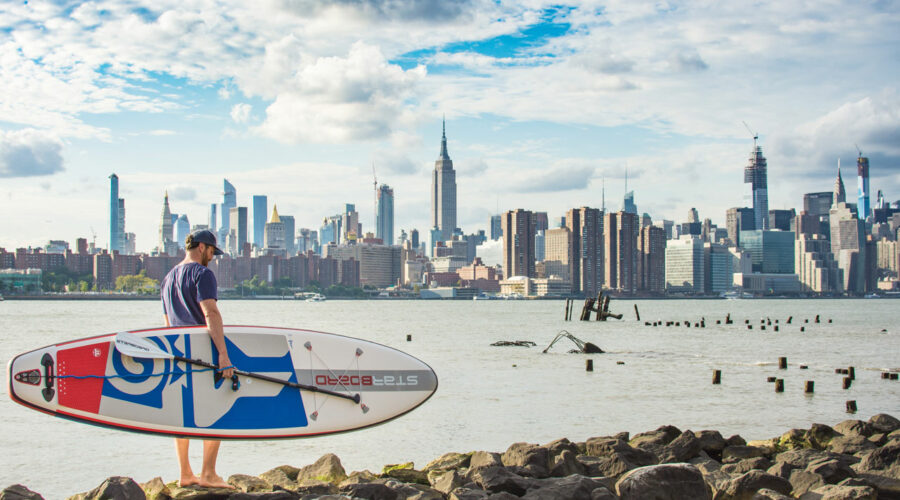 SUP in the City of New York

New York is the biggest city in the United States and undoubtedly one of the most iconic cities in the world. For many of us it is a synonym of cultural melting pot and concrete jungle. Certainly, it’s not the first location that comes to mind when thinking about paddle boarding.

During the last summer, however, my wife Vania and I had the chance to experience New York City from a different point of view. Due to a series of coincidences we ended up staying there for a few weeks, getting a small sample of how life in NYC can be. And I tell you: it’s pretty great for a paddleboarder!

Even though NYC may seem to many of us at first sight not to be the most SUP-friendly city ever, I must say that this picture is mainly wrong. Paddleboarding it’s a great way to explore NYC from a different perspective and, believe it or not, it’s pretty easy to do it!

This, of exploring a city by SUP, is a familiar experience to me. In fact, getting to a city, pumping up my Starboard inflatable board, and starting to explore the city through its waterways, canals, rivers has been my mantra in the last few years. I explored many cities and many countries by means of stand up paddling: by travelling through Europe by rail only for stopping each day in a different city and to go exploring the city for one day with an inflatable SUP board, to go to a full round-the-world trip to go find those civilisations that still live connected with the water (being a river, a lake, a sea – any body of water) and get in touch with them by paying them a visit with one of the simplest means of transportation I know, my inflatable SUP board. I sometimes shared such SUP adventures with friends like Bart de Zwart or Connor Baxter, or my beloved wife and “partner in crime” Vania, as this time in New York City, or I went alone, for those that I call “micro-adventures”, as I did many times just with a tent and sleeping bag.

This time was not different, even if in one of the biggest and most hectic cities in the world. But I tell you, for as weird as it can sound NYC is a pretty good place to explore on a SUP board – even if this idea can be a little intimidating at the beginning. Take my example: as an European arriving in NYC I had no clue on how I could get in the water with my SUP board. After a quick research I found out that water sports activities are quite common in New York, there are designated launch sites and parks where you can enter the water. All I needed was a simple permit that costed me 15 dollars I could have the right to paddle throughout New York City’s water for a whole year. So that’s how my urban paddleboarding adventure began!

But let me explain how I got to envision such a thing. Over the last few years I always had some busy summers between photo shooting jobs, SUP events organisation (see Green Surf Festival and Noli SUP Race in Italy), and coaching the Portuguese SUP national team. Last year, however, due to a series of circumstances I found myself left with a “free” summer. Previously in the year I remember checking the APP world tour calendar and seeing an interesting event scheduled in NYC for the end of the summer. Later in the year I also started talking with my wife about spending a different summer, somehow away from the usual drills beach-surfing-shooting and going somewhere else where we could be inspired by a different setup. And that’s when we decided to take the chance and spend our “free” summer between remote work and leisure in New York City.

And so there we were, my wife Vania and I, seated on a cab that was driving us from JFK to Brooklyn, leaving the European summer behind and eager to experience one month of big-city life in New York City.

I can tell you now: that was one of the most interesting and inspiring experiences ever for me. Everyday we were seeing something new, we could grab the chance of being inspired in so many ways, and ultimately we were having the time of our lives in the city that never sleeps. But beside all this, exploring NYC by SUP proved to be one the (unexpected) highlights of the trip. I was on the water every day alone with my inflatable SUP board enjoying some of the most spectacular views of the Big Apple, surrounded only by a few cormorants sharing the river with me, while all around us millions of people were hectically commuting or staying busy with their lives. In a way these lonely urban paddle sessions at the end of the day made me think about of hectic our lives can be and how easy it would be to stop this commute-work-sleep loop and just take half an our each day just to reconnect with nature and with the water on a SUP board. It is actually not that difficult, even in a mega-city, like New York.

While paddling around NYC I remembered a speech of Svein Rasmussen a few years ago, when he candidly affirmed that he was envisioning a world were people would use a stand up paddle board to commute to work or to spend some leisure time each day in between working sessions. Well, while this “radical” vision still awaits to become reality, I totally understood how in a city like New York, dominated by the rhythms of work and hyper-productivity, a little SUP session everyday would be so beneficial for everyone, restoring our energy levels and reconnecting us to nature in such a simple and quick way.

In fact, while most of us probably dream about picture-perfect SUP travel destinations with tropical waters and pristine beaches, in these times of pandemic travel disruption we should appreciate the simple pleasure of seeing our cities from a different point and reconnect with nature even within our cities.

In truth, this was what my one-month experience in NYC left to me: the notion that, like for everything in life, there’s always an alternative path, there is also an alternative way. Even in our of the most hectic and dense concrete jungles in the world, you can always find a place of calm to reconnect with nature and your inner self. You just need a paddleboard to go find yours!